COVID-19: MASKS REQUIRED FOR COURTHOUSE ENTRY. For information regarding the Coronavirus (COVID-19) and the United States District Court for the Middle District of... END_OF_DOCUMENT_TOKEN_TO_BE_REPLACED

My Time With Judge Johnson 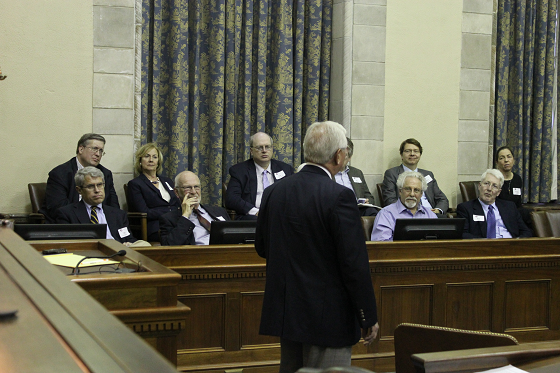 On April 8, the Alabama Middle District hosted the 2016 Johnson Law Clerk Reunion and Symposium. This year's event was "My Time With Judge Johnson." Approximately a dozen of Judge Frank M. Johnson's former law clerks returned to this historic courthouse -- and courtroom 2FMJ -- for what was both a somber reflection and a time of joyful storytelling.

The day started with a tour of the Freedom Rides Museum, which is housed in the now-historic Greyhound Bus Station on Court Street. A noon luncheon in the Johnson library was the cornerstone of the day's activities -- Chief Magistrate Judge Susan Russ Walker opened the luncheon, wth remarks following from Professor Ronald Krotoszynski (The University of Alabama School of Law), Nancy Dunham (the Administrative Office), Lee Sentell (Director of Alabama Travel and Tourism), and Magistrate Judge Gray M. Borden. The lunch's keynote address was given by Honorable Judge Myron H. Thompson.

A public forum followed early in the afternoon, as Judge Walker was joined by 11th Circuit Court of Appeals Judge Joel F. Dubina, and they moderated what could be described as a proper southern storytelling time. Judge Johnson's former clerks sat together in the jury box, and tales of his work life, humor and candid expectations of his staff flowed.

Judge Johnson was very much the focus of this event, but one could not miss the significance his wife had on his former clerks. Their stories related warmth, inclusion, care, and family.