COVID-19: MASKS REQUIRED FOR COURTHOUSE ENTRY. For information regarding the Coronavirus (COVID-19) and the United States District Court for the Middle District of... END_OF_DOCUMENT_TOKEN_TO_BE_REPLACED 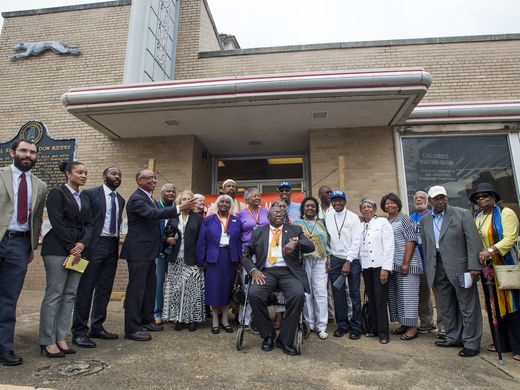 In 1961, the Freedom Riders embarked on a journey to change America as they resolved to ride buses from Washington, D.C., to New Orleans while testing how integrated Southern bus stations actually were.

At the 55th Anniversary Commemoration of the Freedom Rides on Friday morning (May 20), Charles Person and other Freedom Riders watched in a place of honor from the front row, a seat they fought for all those years ago.

Person, one of the original thirteen Freedom Riders, never made it to Montgomery 55 years ago.

He and twelve other Freedom Riders set out from Washington, D.C., on May 4, 1961, to test the de-segregation of interstate transportation facilities passed by Boynton v. Virginia. The goal: New Orleans. And yet, the buses never made it to New Orleans just as Person never made it to Montgomery.

“We didn’t make it to Montgomery. What happened though, I think was fate, because as badly beaten as we were in Birmingham, I don’t think we could have survived the beating these kids were getting in Montgomery,” Person said.

The movement continued as more and more civil rights activists — white and black — began Freedom Rides of their own.

After Montgomery picked up the Freedom Rides’ torch, the city was engulfed in mob violence then expected to follow the buses’ routes through the Jim Crow South. Rev. Dr. Martin Luther King Jr. and U.S. Attorney General Robert Kennedy became involved, however, and eventually the buses were allowed to continue to Jackson, Mississippi.

Fifty-five years after being beaten for the color of his skin, Person and his fellow Freedom Riders know the importance of their deeds. For the youth tasked with carrying their message of equality into the future, Person said to remember how progress was accomplished.

“I think it shows that you can make a difference and young people can change the world. Rather than use violence, if you use nonviolence, you see that you can effect positive change through an evil society such as segregation,” Person said.