COVID-19: For information regarding the Coronavirus (COVID-19) and the United States District Court for the Middle District of Alabama, please review the recent orders of... END_OF_DOCUMENT_TOKEN_TO_BE_REPLACED 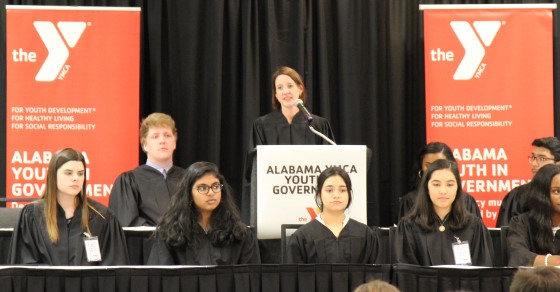 The 2018 Alabama YMCA Youth Judicial Program was held November 3 – 5. This year, the opening session included remarks and a swearing in of participants by U.S. District Judge Emily C. Marks, of the Alabama Middle District.

The YMCA Youth Judicial is a three-day mock trial competition for high school students. Students assume all roles in the lawsuit, from party members to judges. This year’s scenario dealt with youth soccer, and whether the incident that occurred was well within the bounds of the game or excessively aggressive and illegal.

The event kicks off with opening remarks. Judge Marks also spoke, and swore in first the event Judges, and then all the participants as well.

Over 700 high school students  from across the State of Alabama come together for a weekend of mock trials and judicial education under the roof of the Frank M. Johnson Federal Courthouse. Teams compete over the weekend  in a round-robin format seeking to be selected for a final championship round. The generosity of the judges of the Middle District of Alabama, and that of the U. S. Marshal and his team of court security officers along with the Goodwill Cleaning Team collectively insures that all aspects of the weekend program run smoothly and efficiently.