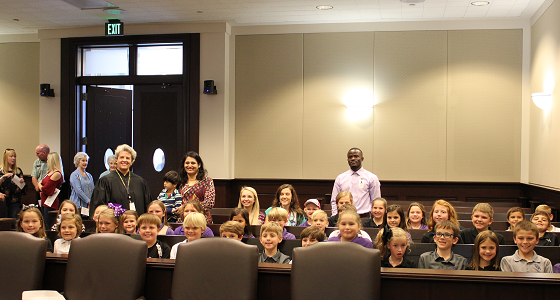 On October 4, 2016 the ALMD was proud to once again welcome the U.S. Citizenship and Immigration Services (USCIS) to Courtroom 2F (our “Ceremonial Courtroom”) for a Naturalization Ceremony. Chief Magistrate Judge Susan Russ Walker presided over the ceremony, which included eleven candidates, and special guests.

Citizens of South Korea, Viet Nam, India, and Liberia renounced allegiance to their former nations, declaring their support and defense of the U.S. Constitution. The Pledge of Allegiance was led by Miss Nichols, granddaughter of two of our own Court Room Deputies, and a member of the Prattville Christian Academy’s third grade, which was also in attendance. Other special guests included the Air University Senior Leader Spouses, members of the Daughters of the American Revolution, and members of the National Society of the Colonial Dames of America.

Judge Walker’s remarks were especially poignant, as she and several of our guests themselves had family that also naturalized years ago. Judge reminded us that America has been enriched by the thousands and thousands who have become citizens, and that citizenship is a cherished privilege, representing the dreams of countless – even those who have yet to achieve that dream.  Judge Walker charged that we responsibly join the search for the common bonds that unite us.  Joni Kwast, of the Air University Senior Leader Spouses, said they have been looking forward to attending this ceremony for some time, and that their organization readily looks for opportunities such as the Naturalization Ceremony.

The ALMD hosts the next Naturalization Ceremony in February.