The Alabama Middle District has two types of judges.

The second type of judge is a United States Magistrate Judge.  A United States Magistrate Judge is a judicial officer of the district court, and upon the recommendation of a merit selection committee, is appointed by majority vote of the active district judges of the court to exercise jurisdiction over matters assigned by statute as well as those delegated by the district judges. Full-time magistrate judges serve for a renewable term of eight years and part-time magistrate judges for a renewable term of four years.

The Article III Judges for the United States District Court Middle District of Alabama are as follows:

The Magistrate Judges for the United States District Court Middle District of Alabama are as follows:

With rising caseloads and limits on judicial resources, the judiciary has managed its resources through interdistrict collaboration and assistance.  One manner in which this occurs is the use of  visiting judges.  These judges are Article III judges, and via designation of the Chief Judge for the Alabama Middle District, they are appointed to hear cases in our court. These judges, who may serve in less burdened districts, assist in a variety of ways.

The Frank M. Johnson Jr Federal Building and U.S. Courthouse at One Church Street in Montgomery, Alabama, has five district courtrooms. Each of these courtrooms features an arched niche containing a hand-painted medallion behind the judge’s bench.

Each medallion is unique and reflects one of the five constitutional purposes, and the Latin phrase on each is taken from the five entrances of the Johnson building.

Provide for the common defense.  The Latin phrase regnant populi means, “the people shall rule.”

The Frank M. Johnson Jr U.S. Courthouse Complex is staffed daily and open Monday through Friday from 8 a.m. to 5 p.m., except for legal holidays.  The U.S.General Services Administration website has more information about the architecture and history of the FMJ complex. 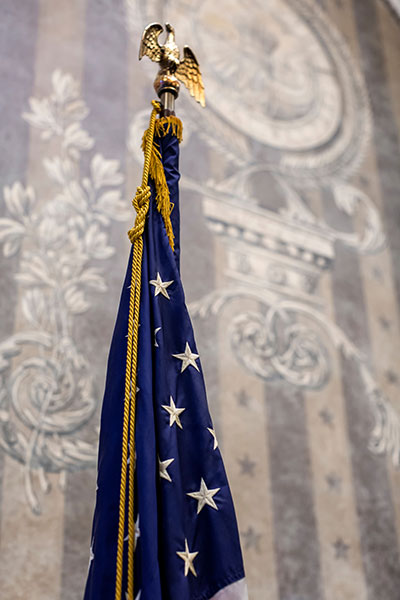