Charles S. Coody has served as a Magistrate Judge in the Middle District of Alabama since May 1, 1987. He received his B. S. degree in 1968 from Spring Hill College, where he was a varsity collegiate debater. Following graduation from college, Judge Coody was commissioned as a second Lieutenant in the United States Army. From 1968 to 1970, he was an armored cavalry officer in the Second Armored Division at Fort Hood, Texas. In 1971 he served as an Army Advisor on Advisory Team 80 in the Republic of Vietnam. He was awarded two air medals and the Army commendation medal. Judge Coody also served in the Alabama Army National Guard.

Judge Coody received his J. D. degree in 1975 from The University of Alabama School of Law, where he was a founding editor of the Law & Psychology Review and a member of the Bench and Bar Legal Honor Society. From 1975 to 1976, Judge Coody served as a law clerk to the Honorable T. Eric Embry, Associate Justice of the Alabama Supreme Court. Thereafter, Judge Coody was associated in private civil practice with Smith, Bowman, Thagard, Crook & Culpepper (now Balch & Bingham) in Montgomery. In 1978, he was appointed General Counsel for the Alabama State Board and State Department of Education, a position he held until his appointment as a Magistrate Judge.

Judge Coody currently serves as a member of the Judicial Conference of the United States Committee on Court Administration and the Case Management and the Project Steering Group for development of the Next Generation CM/ECF, the Judiciary's electronic docketing/case management system. He is also the Chair of the Middle District's Information Technology Committee, a past President of the Hugh Maddox Inn of Court, and a past Chair of the Federal Bar Association's Bench & Bar Committee.

Judge Coody served as Chief Magistrate Judge from May 2001 to April 2008. 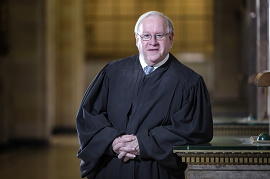