2FMJ
Ext. 3650
Contact chambers for a proposed order email address.
Marion Chartoff
Anthony Green
Judge Thompson is a United States District Judge for the Middle District of Alabama. He was nominated to that seat in September 1980 by President Jimmy Carter. He served as Chief Judge from 1991 to 1998.
Judge Thompson is a graduate of Yale College (B.A. 1969) and Yale Law School (J.D. 1972). He served as an Assistant Attorney General of Alabama from 1972 to 1974. He was the first African-American Assistant Attorney General for the State of Alabama, the first African-American bar examiner for the State, and the second African-American federal judge in the State. Judge Thompson was in private practice from 1974 until 1980. He was a Founding Director and Board Chairman of the Alabama Legal Services Corporation.
Judge Thompson has contributed to the development of legal scholarship by serving as Jurist in Residence at Pace Law School in 2012, delivering the Dean’s Lecture at Yale Law School in 2004, and serving as a New York University Law School Scholar in Residence in 1998 and 1999. He was the Eleventh Circuit’s District Judge Representative on the Judicial Conference of the United States from 2007 through 2011 and was chair of the District Judges Representatives to the Conference from 2010 through 2011. As Chief Judge, he was instrumental in preserving the Montgomery bus station where the Freedom Riders were attacked in 1961 and in establishing the Freedom Rides Museum.
In 2017, for having made a substantial contribution to public service and the legal profession, Judge Thompson received the Yale Law School Award of Merit, the highest award the law school may give to a graduate and faculty member. He was also named a 2017 Alabama Humanities Foundation fellow in honor of his noteworthy achievements and commitment to the advancement of the humanities in Alabama. In 2015, Judge Thompson received the National Public Service Award from Stanford Law School, in recognition that his “work on behalf of the public has had national impact.” In 2013, he was awarded the Thurgood Marshall Award by the National Bar Association’s Judicial Council in recognition of his “personal contributions and extraordinary commitment to the advancement of civil rights and for being a role model for members of the bench and bar.” He received the 2005 Mark De Wolfe Howe Award from the Harvard Civil Rights - Civil Liberties Law Review “for his Unyielding Commitment to Advancing the Personal Freedoms and Human Dignities of the American People.” In 2008, he received the Judge Jane M. Bolin Service Award from the Yale Law School BLSA in recognition of his “Outstanding Dedication and Support to Yale BLSA and Contributions to the Legal Community.” Thomas Goode Jones Law School awarded him an honorary J.D. degree in 2010 and the Ernestine Sapp Justice Award in 2009. In 2009 he also received an Honoree Award from the Touro Law School BLSA.
Judge Thompson and his wife Ann Oldham have three sons. 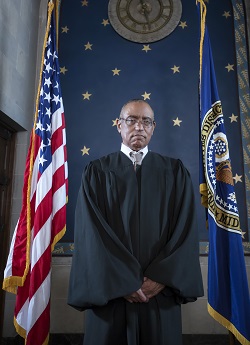 Pathways to the Bench