COVID-19: MASKS REQUIRED FOR COURTHOUSE ENTRY. For information regarding the Coronavirus (COVID-19) and the United States District Court for the Middle District of... END_OF_DOCUMENT_TOKEN_TO_BE_REPLACED

District Judge W. Keith Watkins was appointed by President George W. Bush to a vacancy in the Middle District of Alabama on December 27, 2005. Judge Watkins was elevated to Chief District Judge on May 18, 2011, and he served as Chief Judge until January 31, 2019. He assumed senior status in 2019. A native of Troy, Alabama, Judge Watkins practiced law in Tuscaloosa for two years and in Troy for 28 years, with a broad general practice. He is a graduate of Auburn University and The University of Alabama School of Law. Among other positions in the bar, Judge Watkins is a Fellow in the Alabama Law Foundation and served as the Bar Commissioner for the Twelfth Judicial Circuit and as a member of the Alabama State Bar Task Force for Alternative Dispute Resolution. He served as the mediator in over 200 civil cases in state and federal courts in Alabama and Georgia prior to taking the bench. Judge Watkins serves on the boards for The Frnak M. Johnson Jr Insititute, the Rosa Parks Museum, the Federal Judges Association, and The American Village. Judge Watkins and his wife have two grown children and five grandchildren. 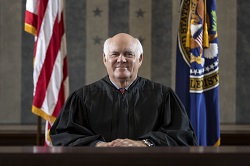