COVID-19: MASKS REQUIRED FOR COURTHOUSE ENTRY. For information regarding the Coronavirus (COVID-19) and the United States District Court for the Middle District of... END_OF_DOCUMENT_TOKEN_TO_BE_REPLACED

Judge W. Harold Albritton is an Article III federal judge for the United States District Court for the Middle District of Alabama. He joined the Court in 1991 after being nominated by President George H.W. Bush. Judge Albritton served as Chief Judge from 1998-2004. He assumed senior status in 2004.

Judge Albritton is a 1959 graduate of The University of Alabama, where he was a member of Phi Beta Kappa, Omicron Delta Kappa, and the Jasons Senior Men's Honorary, and where he served as Vice-President of the Student Government Association. He is a 1960 graduate of The University of Alabama School of Law, where he was a member of the Alabama Law Review and the Farrah Order of Jurisprudence (now Order of the Coif). Judge Albritton was a U.S. Army captain, JAG Corps, 1960-1962 and in the United States Army Reserve, 1962-1968. He practiced law in Andalusia, Alabama, from 1962-1991. While in private practice he was a Fellow of the American College of Trial Lawyers, President of the Alabama Law School Foundation, and President of the Alabama State Bar 1990-1991. He was the fourth generation of his family practicing in a law firm established in 1887 by his great-grandfather, Edgar T. Albritton, who has been named to membership in the Alabama Lawyers Hall of Fame. It was the oldest law firm in continuance existence in the state of Alabama when it was closed by the fifth generation in 2015.

In 2011, the Alabama State Bar created the William Harold Albritton Pro Bono Leadership Award in recognition of his establishment of the Alabama State Bar Volunteer Lawyers Program during his presidency, and Judge Albritton was the first recipient. It is presented each year to an individual attorney who has shown outstanding leadership and commitment to improving pro bono legal services to Alabama's low-income citizens.

While in active status Judge Albritton served for six years on the national level as a member of the Judicial Conference of the United States's Court Administration and Case Management Committee, by appointment of Chief Justice William Rehnquist. In 2003, he was honored by the Boy Scouts of America with an award designating him a Distinguished Eagle Scout.

Judge Albritton and his wife, Jane, have three sons, all attorneys, six grandchildren, and three great-grandchildren. 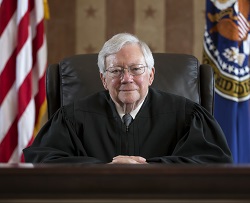