The Alabama Middle district is implementing a policy change regarding the juror list and juror profiles that are provided to the parties pre-trial. Currently, these items are made available the Friday afternoon before the trial term begins. Effective immediately, these will now be available on the Read more 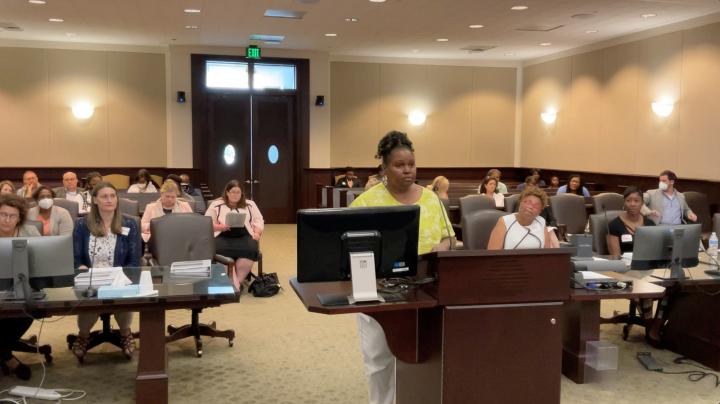 The Judge Frank M. Johnson, Jr. Institute hosted two conferences for teachers this summer at the Frank Johnson Courthouse, with the help of judges, attorneys, and others from the Middle District of Alabama.

The teachers attended the Johnson Institute Scholars conferences to learn about the U.S. Constitution, independent judiciary, and historic cases of the Middle District of Alabama. The teachers will take the knowledge they gained back to the classroom to share with their students and colleagues.

"This is the best conference/seminar/forum I have ever attended,” said Richard Englar, a high school teacher from Maryville Preparatory School in Lutherville, Maryland—one of several out-of-state teachers who traveled to Montgomery in June for the experience. “It will be extremely useful when I teach my Government class this fall.”

The conferences were the first of what will be regular, in-person events hosted by the Johnson Institute for middle and high school teachers of government, civics, history, and related social studies subjects. More than 40 teachers attended this summer’s two conferences from as close by as Montgomery and as far away as Ohio.

Over multiple days, (June 21-22 and July 27-29), the teachers met with judges and other legal experts to discuss the Constitution, how the legal system works, and related topics. The groups took a bus tour of historic sites in Montgomery, and interacted with a judge and volunteer attorneys in a mock hearing workshop designed by the federal courts for high school students called Civil Discourse and Difficult Decisions.

“This was a phenomenal experience as it permitted teachers to visualize and experience the process learners would experience with mock trials,” said Patricia Ray, an eighth-grade history teacher at Goodwyn Middle School in Montgomery, AL, following the CD3 workshop in July. Ray added that the workshop would allow her to strengthen her instructional capacity.

As part of the conference, the Johnson Institute provided teachers with in-depth resources on historic Constitutional court cases decided in the Middle District. This included Browder v. Gayle, the case stemming from the events that led to the Montgomery Bus Boycott, and Williams v. Wallace, which led to authorization of the Selma March.

Sessions included explanations of the “anatomy” of civil and criminal cases with guest speakers, a viewing of sentencings, and discussions of methods for teaching about court cases from an expert teacher.

“All of the presenters here were awesome. Not only was the information incredibly engaging, the dynamic of the judge and attorneys and their candor in describing the process of adjudicating criminal cases was the appropriate level of depth,” said Barbara Waltsgott, an AP Government teacher at Baker High School in Mobile, AL, following “Anatomy of a Criminal Case” at the June session, led by a magistrate judge and including attorneys from the Department of Justice and the Federal Defenders office.

Senior District Judge Keith Watkins, a charter member of the Johnson Institute board, helped to plan the conference based on his experience observing the Montana Judicial Institute for teachers hosted by the District of Montana in Missoula.