The judges of the United States District Court for the Middle District of Alabama are pleased to announce that they have selected Trey Granger as the new Clerk of Court. Mr. Granger becomes the Clerk of Court on January 1, 2023, upon the retirement of Debbie Hackett. (Full Announcement) Read more 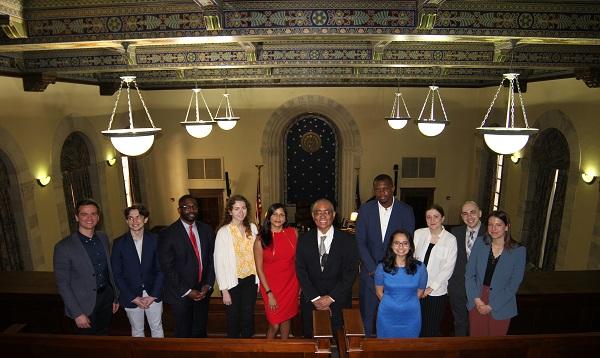 On Friday, March 4th, 2022, the Alabama Middle District welcomed members of The Brennan Center for Justice. The Brennan Center for Justice is a non-partisan law and policy institute that stands to uphold the values of democracy. It is also the namesake of Justice William J. Brennan Jr, who served as a United States Supreme Court Justice from 1956-1990.

During their visit, The Brennan Center was able to observe an ongoing trial being presided over by Senior District Judge Myron H. Thompson. Guests were also able to join Judge Thompson and Senior District Judge Keith Watkins on the balcony of the Frank M. Johnson Courtroom for lunch and a discussion. Judge Watkins provided a brief overview of the courthouse and the Legacy of Judge Frank M. Johnson.

Alan Beard, Policy Strategist in the Office of the President, spoke on behalf of The Brennan Center about their work in both policy and advocacy across the United States. Judge Thompson discussed with the group some of the rich history of the courtroom, the state of Alabama, and his hometown of Tuskegee, Alabama.

After the balcony talk, Judge Watkins and Thomas Raines, executive director for The Judge Frank M. Johnson Institute, brought the group down to The Judge Frank M. Johnson Library so that they could gain a deeper understanding of Judge Johnsons legacy and observe his artifacts.
To learn more about The Brennan Center, see their website - https://www.brennancenter.org/about.