The United States District Court for the Middle District of Alabama requests the honor of your presence at the Investiture of Kelly Fitzgerald Pate as United States Magistrate Judge on Thursday, August 25, 2022 at 3:00 p.m. in the Ceremonial Courtroom. Frank M. Johnson, Jr. Courthouse Complex One Read more 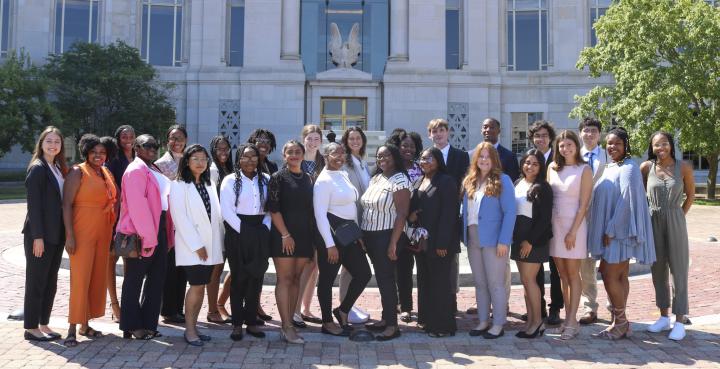 During their visit, Scholars were provided with a brief overview of Judge Frank M. Johnson Jr and were givien the opportunity to tour the Johnson Library. They also enjoyed a discussion with  United States Magistrate Judge Jerusha Adams about the legal profession and learned more about her path to the bench. Judge Adams shared some tips about finding mentors, applying to law school, and allowing yourself to engage in unexpected opportunities because you never know how positively they could impact your life.

Scholars also had the opportunity to speak with Senior United States District Judge Myron H. Thompson about his legal career and tenure as a Judge, the history of the courthouse, and the impact of Judge Frank M. Johnson Jr on the country. Judge Thompson also provided scholars with a brief overview of how some of the architectural decisions were made for this courthouse and challenged the students to think critically about the history of buildings that they enter in the future. The architecture always tells a story!

Chief United States District Judge Emily C. Marks spoke with the students about her transition to the bench from private practice. Judge Marks also provided the Scholars an overview of some of her specific duties as the Chief Judge of the Middle District and expressed her sincere love for the job. Additionally, she spoke of the value of a legal education and discussed how rewarding a legal career can be.

The Scholars also had the opportunity to have lunch with both Term and Career Law Clerks for the Middle District. During lunch, various clerks shared information about their journey to the legal profession and their experiences working with the Federal Judicial System. Clerks were also able to provide detailed advice about the law school application process, how to decide what law school to attend, applying for clerkships, and more! The Scholars asked very inquisitive questions and gained a lot of useful insight that they can take with them as they contemplate pursing a legal career. The Middle District enjoyed having the Alabama Scholars engage with the court family and looks forward to the program's return in the future.