COVID-19: MASKS REQUIRED FOR COURTHOUSE ENTRY. For information regarding the Coronavirus (COVID-19) and the United States District Court for the Middle District of... END_OF_DOCUMENT_TOKEN_TO_BE_REPLACED

Judge Stephen M. Doyle was sworn in as a United States Magistrate Judge on January 7, 2019. Prior to joining the court, Judge Doyle practiced for over 28 years with the U.S. Department of Justice. He served from 1990-1998 in the Torts Branch of the Civil Division at Main Justice in Washington, D.C. He then transferred to the Criminal Division where he prosecuted national security crimes in the Counterespionage Section. In 2004, he transferred to the U.S. Attorney’s Office for the Middle District of Alabama where he served as Chief of the Civil Division until his appointment to the bench.

Judge Doyle is a retired Army National Guard Colonel. He was commissioned a 2LT of Infantry through ROTC in 1985 and served as a platoon leader in the 2/175th Infantry before transferring to the JAG Corps. His assignments include State Staff Judge Advocate, Deputy SJA, Brigade Judge Advocate 29th Combat Aviation Brigade, and Senior Trial Counsel. From 2010-2011 he deployed to Afghanistan as the senior U.S. military advisor to the Afghan National Army 209th Corps in Mazer-i-Sharif. He was also the Task Force SJA for the 2015 Baltimore riots. His decorations include the Legion of Merit, Bronze Star Medal, Meritorious Service Medal (4 OLC), Army Commendation Medal (3 OLC), Air Force Commendation Medal, Army Achievement Medal (2 OLC), Afghanistan Campaign Medal, and NATO ISAF Medal. 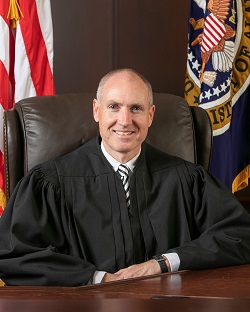