COVID-19: For information regarding the Coronavirus (COVID-19) and the United States District Court for the Middle District of Alabama, please review the recent orders of... END_OF_DOCUMENT_TOKEN_TO_BE_REPLACED

Home » Andrew Brasher Sworn in as US District Judge

Andrew Brasher Sworn in as US District Judge 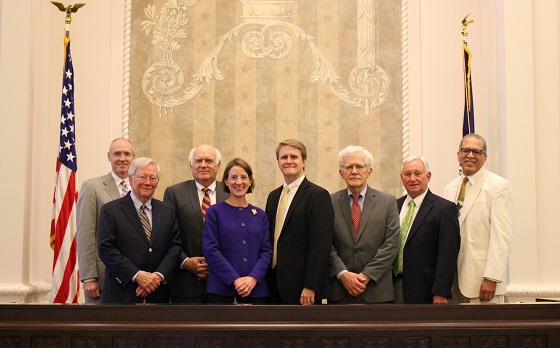 On Tuesday, May 7 2019, the United States District Court for the Middle District of Alabama welcomed its newest Article III judge. The Honorable Andrew L. Brasher, pictured above fourth from the right, was nominated by President Donald J. Trump, and was sworn in by Chief District Judge Emily Marks.

Before being appointed to the bench, Judge Brasher served as the Solicitor General of the State of Alabama.  In this capacity, he argued in the U.S. Supreme Court, the U.S. Court of Appeals for the Eleventh Circuit, and the Alabama Supreme Court, tried cases in Federal and State courts, and won several “Best Brief Awards” from the National Association of Attorneys General. Before joining the Alabama Attorney General’s Office, Judge Brasher was in private practice, specializing in complex civil litigation and white-collar criminal defense.