COVID-19: MASKS REQUIRED FOR COURTHOUSE ENTRY. For information regarding the Coronavirus (COVID-19) and the United States District Court for the Middle District of... END_OF_DOCUMENT_TOKEN_TO_BE_REPLACED

Honorable Magistrate Judge Walker was sworn in as a United States Magistrate Judge on April 22, 1996. She graduated with highest honors from Eckerd College in 1977, where she received a Thomas Presidential Scholarship and a college-sponsored National Merit Scholarship. After a year of graduate work at the University of Virginia, she attended Oxford University on a Rhodes Scholarship, completing her B.A. degree with first class honors in English language and literature in 1980. She was elected as a foundation member of Phi Beta Kappa at Eckerd College in 2004, and awarded an M.A. degree from Oxford University in 2011.

Judge Walker received her law degree from the Yale Law School, winning the Felix S. Cohen and Colby Townsend Memorial Prizes for legal writing, and the John Currier Gallagher Prize for trial practice in Yale's Barrister's Union. She clerked for Frank M. Johnson Jr on the Eleventh Circuit Court of Appeals in 1985-86. She served as an Assistant Attorney General for the State of Alabama, and thereafter as a partner in private practice at the law firm of Miller, Hamilton, Snider & Odom until her judicial appointment.

Prior to joining the bench, Judge Walker was appointed as president of the Board of Directors of the Middle District's Federal Defender program and as an Alabama State Bar examiner in civil procedure. She also has been a member of the Alabama Inns of Court and the Editorial Board of the Alabama Lawyer, and she served as the Alabama Secretary for the American Rhodes Trust. She is currently a member of the Board of Trustees of Eckerd College, and she regularly teaches both mediation and law and literature to fellow judges for the Federal Judicial Center.

Judge Walker served as Chief Magistrate Judge from May 2008 to February 2017. 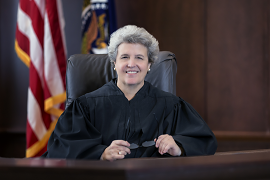